The task seemed easy enough at first glance. But then I numbered thirty lines and am now staring at a blank screen, unsure what’s interesting enough about me to be deemed a fact worthy of sharing. Maybe they’re not all going to be winners. Maybe some of them will be boring or surprising or downright weird. But here goes. All thirty of them.

1) I. Love. Music. No, I can’t sing. Nope, I’ve never played an instrument. I know nothing about the technical aspects behind making it or arranging it or even describing it. I just know what I like. And I like to know what others like, too.

2) I’m fairly quick to admit (and apologize) when I’m wrong and find it infuriating when others don’t show me the same kindness.

3) I have tried and tried but cannot whistle.

4) There’s not much that I regret in life, as I’m a big believer in that everything happens for a reason and all experiences shape who we are. The one exception to my “no regrets” is that I didn’t have my dad walk me down the aisle.

6) Disorganization adds to my anxiety.

7) I used to love driving. Now, I’m much happier as the passenger.

8) I moved out of my parents house (and moved in with my sister) one week after junior prom night. I didn’t move back home for about a year. That time “on my own, with training wheels” was a formative time in my life and I’d not change it for anything.

9) Technically, I graduated high school in the top ten of my class. But in actuality, I was failing math and should’ve been held back. I’m forever grateful for the sympathy C that Mr. Austin gifted me in calculus so I could walk with my class.

10) I loathe being the center of attention. This becomes more true as the years pass.

11) I miss being a student. I don’t think I’d necessarily want to pursue another degree, though who knows? But I hope to someday be in a classroom again.

12) Here’s a list of things that I don’t consider at all when choosing who to surround myself with in life: race, gender identity, sexual preference, political affiliation, religious beliefs, ethnicity, level of education, economic standing…. In fact, it’s easier if I list the thing (singular) that DOES matter. Are you an asshole? Then I don’t like you. Literally everyone else is welcome in my life.

13) I stumble through parenting with this illogical, irrational fear that everything I say or do is somehow damaging my daughter’s psyche.

14) My mom, with whom I was extremely close, passed in 2006 at the age of 48. I was 22 at the time and feel like I was robbed of having an adult friendship with the greatest woman I’ll ever know.

15) I’ve got six years each of French and Spanish under my belt but don’t feel confident enough to speak either. However, I sometimes use one or the other to narrate in my head, just to test myself on how much I remember.

17) I feel physically the best when following a keto diet, but man, do I love carbs!

18) I fear stagnancy and change equally. Life is a balancing act and I don’t always have it just right. But I’m working on it.

19) I don’t have a favorite color. Most people don’t like to accept that response so when pressed, I’ll sometimes pick randomly.

20) While I’m a generally happy person in the mornings, I consider myself a night owl.

21) I used to buy nonfiction books with good intentions but rarely actually read them. (This includes The Second Sex by Simone de Beauvoir, which I’m pretty sure makes me a bad feminist.) I’m still, holding out hope that I’ll read Becoming someday.

22) I am ruthless in Scrabble. It took me many years of practice with my mom before I finally won. And since then, I’m pretty much undefeated. Except for that one time when my husband played “djinni” and I challenged. (I’m still not convinced it’s a real word… He cheated!)

23) My first love passed away almost three years ago now. And though we’d not been together since we were practically babies, his loss still hurts me to this day.

24) I’ve always known I have trypophobia. I just didn’t know there was a word for it until I was in my 30s.

25) Trashy reality TV is my guilty pleasure. Love Island, Big Brother, 90 Day Fiance….gimme all of it!

26) My eyes are blue, despite the fact that my husband will try to convince you that they’re grey.

27) I’ve not eaten meat (including seafood and poultry) since I was about 12 years old. But I wish I could bring myself to enjoy chicken.

28) My top five favorite scents are, in no particular order: that moment when the rain first starts on a hot summer afternoon, warm fresh-from-the-dryer laundry, patchouli, anything citrus, and bleach. I said what I said.

29) I prefer my showers at night and hot enough to melt the skin off of me. Even during the summer.

30) My favorite day of the week is Thursday because sometimes the anticipation of Friday is better than the Friday. 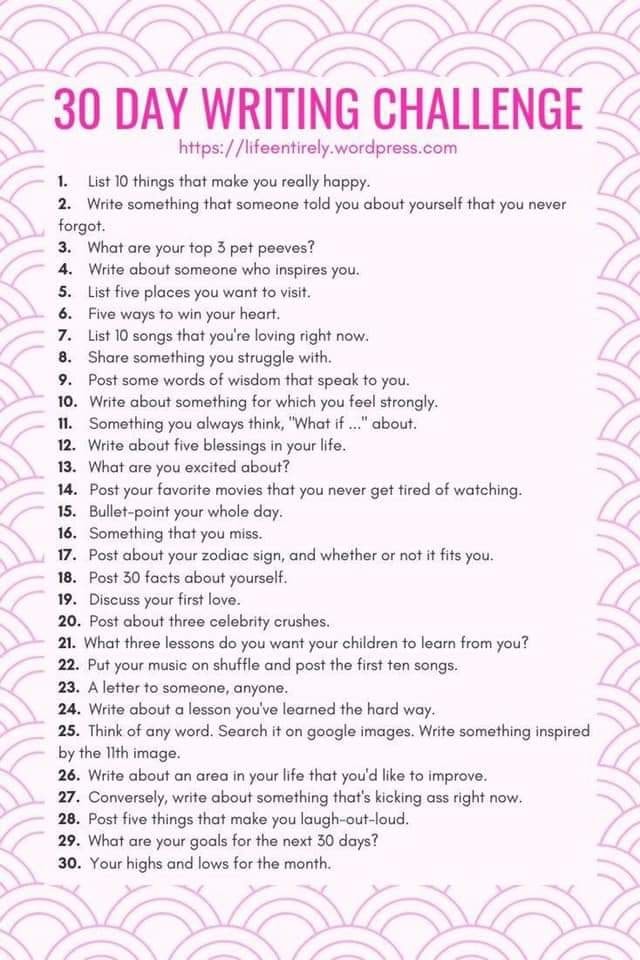