One thing I have learned since becoming a parent is that poop is important. And talking about it is perfectly acceptable. You, my dear readers, will learn that from this post, if you haven’t already.

Before I was a parent, I didn’t realize you need to know when a kid poops. Not only when but how often and—gasp—what it looks like. (“Greenish and kinda seedy” is a common utterance in our house.) And this past weekend, I learned that poop is never more important than when it’s not happening. As was the case this weekend.

Friday night is a bath night for Rylin. Chris usually puts on a bathing suit and jumps in with her; it’s easier than trying to get her to sit still in the bath seat we have. So when she didn’t do her usual afternoon poop on Friday, Chris and I decided that we’d bathe her “after she poops tomorrow morning.” That turned into “before bed tonight after she poops” which turned into “Sunday morning after she poops.” Several times over the weekend, she got that real concentrated look on her face which was coupled with a little grunting and general fussiness. But when we changed her…no poop.

So we did what any parents in our shoes would have done. We busted out the big guns. We fed her Kirkland brand formula. Now, Kirkland makes some wonderful products. Don’t get me wrong here. But their baby formula seems to go right through Rylin. Which was a nuisance when we first discovered it but is a lifesaver when she’s having a hard time going. 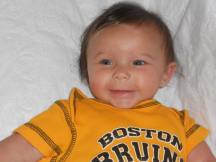 When Sunday night rolled around and there still hadn’t been poop, we admitted defeat. “She HAS TO have a bath tonight,” I decreed. Chris agreed.  While he drew the bath and suited up, I laid Rylin on the changing station on her “pack and play” which, for the record, is about five steps from the bathroom door. I took off her outfit and diaper. She smiled at me. It was a wide, tight-lipped grin which when flashed my way at 6:30am means “Hey, mom! I’m glad to see you!” But apparently when she does it at 7pm it means, “Brace yourself. I’m about to pee on you.” I let her finish, dried her legs with a baby wipe, and passed her off to daddy in the bathtub while I changed the wet pad that lines the changing table. Phew, I though. At least she peed BEFORE I picked her up to bring her to the bathtub. Because THAT’S happened…she’s happy as a clam in the bathtub and I’m standing there with a pee-drenched shirt. Not fun.

Rylin loves water. Be it the pool, a bath, or a shower, she kicks excitedly and tries to grab at the water. So bath time is usually all smiles and laughter. But last night was different. Chris bounced her up and down in the water and let her splash a little. Then all of a sudden, she started screeching like a tween who was just told that Justin Bieber has retired. Bright red face, pouty lip, hands balled up in fists. Inconsolable. Chris did what any concerned parent would do. He lifted her up out of the water and pulled her to his chest for a hug. And that’s when I saw it.

“Keep her up out of the water!” I instructed Chris and I ran to grab some baby wipes. And that’s how I came to be bending over the bath tub, catching poop in a baby wipe. The whole time she was going, she kept trying to turn around to see what on earth was happening back there, fussing and straining all the way. And finally she was done. I dropped the “gift” into the toilet, flushed, and told Chris I’d be right back with another baby wipe to clean her before he puts her back into the bath water.

No sooner had I walked out of the bathroom to get more baby wipes, I heard Chris say, “Oh, boy. The Kirkland formula has kicked in.” I came back to the bathroom to find what I was hoping we had managed to avoid. Poop. In the bath water. Rylin smiled at it as it floated away, towards the drain. Not that tight-lipped grin. A big, gaping smile that says, “Look what I did!”

And all we could do was try not to laugh and remind each other, “She’s lucky she’s cute.”

One Response to “Poop Happens”