Weekly Writing Challenge: Listen to the Voices in Your Head August 22, 2012

The Daily Post’s weekly writing challenge this week was “Listen to the Voices in Your Head.” It was an exercise in passive vs active voices. If you’d like to read more about the challenge check out their blog post:

Two Years in the Making

The pool was taken down our second springtime in the house. How two years managed to slip past us with that eyesore—empty but for pieces of old, cracked liner and whatever weeds had managed to sprout up through the sand—taunting us from the back yard, I’ll never know.

The lifespan of our pool was recounted for us once by our neighbor Hank during one of our first encounters with him. He had gotten home from work one day several years back, he’d said, to find that the homeowner at the time had installed it while he was away. It was positioned obscenely close to the property line but Hank had turned a blind eye. Memories of sleepless summer nights were undoubtedly called to his mind as he eyed the pool, roughly six feet from his bedroom window, and took a moment to reminisce about the rowdy kids who used to live next door.

Do you see Hank’s bedroom window in the upper left corner?

“So it didn’t always look like this?” I motioned toward the skeleton that remained.

“Nope,” Hank replied. “When the old owners moved out and left the bank with the house, nobody took care of the pool. Sure, the bank would drive by once in a while and toss a chlorine tab in but that didn’t keep the water clean or the mosquitoes away. So I duct taped a razor blade to a yardstick and sliced up the bottom of the liner best I could. And that ended that problem,” he proclaimed proudly. (Ah, so it was Hank we have to thank for that eyesore…)

Much like how it went up, the pool came down the same way—all in one day, while I was at work. My brother-in-law was just hauling away the final pieces as my car pulled into the driveway. The yard seemed so much larger with that blemish gone and I felt like Chris and I had taken a big step towards reclaiming our yard.

That excitement was short-lived, though. Soon, a stark realization slapped me across the face. Removing the pool left a new blight: the sand pit that had once cradled it. Garbage bags were filled with debris. And for the first year, the yard waste barrel gobbled up a steady diet of weeds, plucked from our former pool every few weeks. Something would be done someday…. 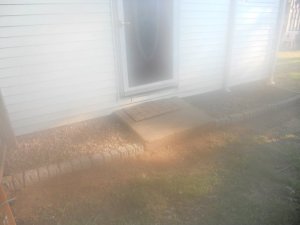 Repurposing the rocks from around the pool felt great!

A little over a year later, we’d had enough. The wheelbarrow was pulled from the shed and in the heat of the July sun the rocks that encircled where the pool used to be were not-so-lovingly shoveled out and moved to a newly created rock bed by the back door. Bushes that used to flank the pool were removed. And in our excitement over seeing those changes, we pat ourselves on the back and let the remaining mess slide. Again.

This spring marked the second anniversary of our poolectomy—if it’s not a word, it should be! It was in June that Chris came to me and said, “You know what I want for my birthday?” (True, his birthday wasn’t until late-July but if you knew my husband you’d know that his birthday isn’t a day…it’s a month-long extravaganza.) My blank expression clearly gave away that I had no guesses as to what he was thinking. “Dirt,” he replied.

The dump truck backed into the yard that mid-July morning through the gap left after Chris had removed two fence panels and the post where they met. And 20 yards of fresh topsoil was dumped onto what would be our lawn. “You’re gonna want to seed right away,” the delivery driver warned, “or else you’ll be over-run with weeds.” Slowly (and thankfully with lots of help from our family), the mound of dirt was spread out across the sandy crater and prepared for the seed and fertilizer the local Agway salesman helped me heft into the trunk of my Elantra. 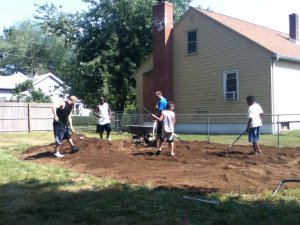 The seeds and fertilizer were spread. The plot was raked for what felt like the hundredth time that day. And as we covered the newly seeded dirt patch with fresh straw, our other neighbor Dan popped his head over the fence to chat. We confessed that now that it was done, we weren’t sure why we had waited so long to finish this job. Dan shrugged and said, “I remember my first house. I was young and didn’t know anything about owning a house. But what I learned was that it’s a process. You can do things little by little because you’ve got years to make it yours.” His words meant more to me than he probably knew.

As the sun was nearly finished setting that night, Chris and I sank into the swing in the back yard to unwind. The only sounds we heard were the crickets beginning their song and the soft din of the sprinkler as it oscillated over our hard work. It was a perfect ending to a beautiful and productive day. I rested my head on Chris’ shoulder and breathed, “This is one of those moments that I want to remember forever.”

We anxiously checked on our would-be lawn frequently. And after only about a week, our first sprouts of grass—tiny, tenuous little strands of green—began pushing their way out of our earth. “We have grass!” we told our friends, like proud parents announcing the birth of their first born. A couple of weeks later, the straw was raked up. And on our dirt’s one month birthday Chris celebrated by mowing the lawn. The whole lawn.

Our kids approve of the new lawn, too.